Adam Lambert will debut on GLEE November 7, 2013, allowing time for not only Fox’s World Series coverage but breathing time after the Cory Monteith tribute episode, “The Quarterback.” The episode will be called “A Katy or a Gaga.”

Aww, Flat Addy is back!

Here’s the promo video. I didn’t know anyone could look so darn sexy swinging on a rope!

Personally, I think “The Apocalipsticks” is hysterical! I just hope his character, isn’t too orientation-centric, if you catch my drift. But judging from this photo, I’m not holding my breath. 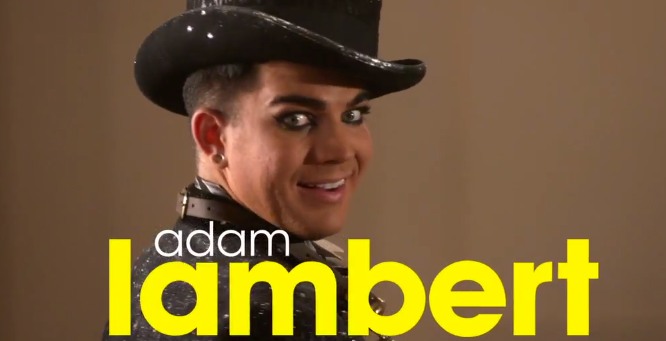 No apologies. I just want Adam to show members of the not-yet-convinced public his sonic singing chops mixed with the magnetic personality we all know he has. Adam’s character, Elliott Gilbert with the stage name of Starchild is described as “a handsome youth, in David Bowie/Lady GaGa/Velvet Goldmine drag.”

It sounds like Adam’s character will have professional experience since his plotline will be involved with the New York-based characters Rachel (Lea Michele), Kurt (Chris Colfer), Santana (Naya Rivera) and maybe even Dani(Demi Lovato).