The fans in Australia were treated to an extra special addition to the phenomenally well-received Queen + Adam Lambert show! 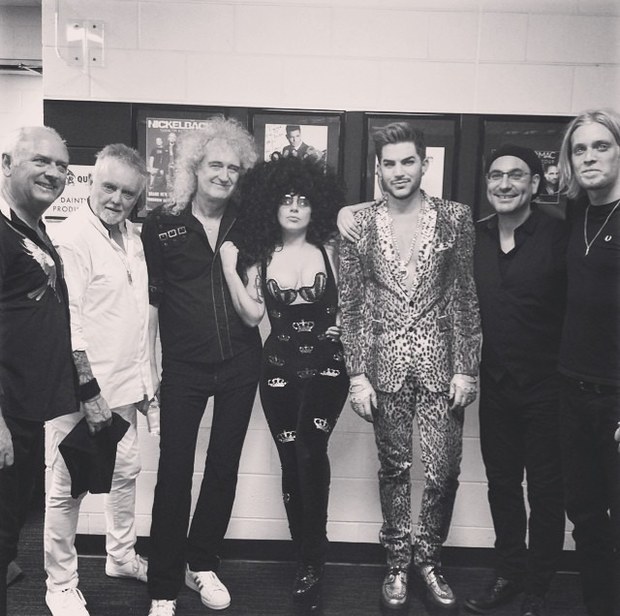 Thanks to an unlikely intersection of Australian tour routes, Lady Gaga was able to make a surprise appearance with the Adam Lambert-fronted Queen at the band’s Sydney stop on August 27th. The Artpop singer joined the group onstage for a performance of “Another One Bites the Dust,” with Gaga wearing a giant Afro and dark jumpsuit with little crowns embossed on it, since this was a Queen show. The Australian leg of Gaga’s artRAVE: The ARTPOP Ball trek kicked off earlier this week. Watch a crowd-shot clip of Gaga’s visit below.

Brian May also tweeted a selfie of himself and Gaga post-show, and Gaga followed suit on Instagram with a pic of her with the whole group. While the collision of Gaga and Queen may seem random, she has actually worked with both Lambert and Brian May in the past: She co-wrote the track “Fever” which appeared on Lambert’s debut LP, For Your Entertainment, while May played guitar on Gaga’s Born This Way single “Yoü and I,” a song that also featured a sample of Queen’s “We Will Rock You.” With that in mind, the most surprising part about Gaga’s Queen appearance is that she sang “Another One Bites the Dust” instead of “Radio Ga Ga.”