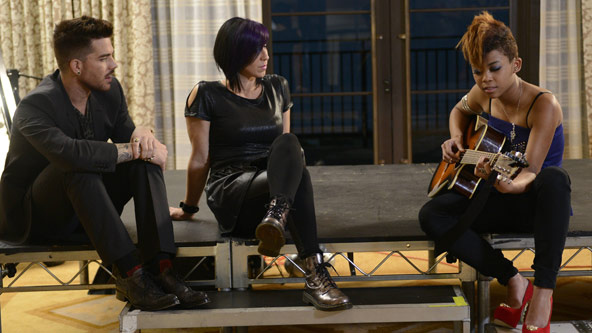 The following are excerpts from this very in-depth article. There’s a link at the end to take you to the full article.

TVLINE | Do you think next year we might see a little more of the Idol Boot Camp that preceded Rush Week? We only saw glimpses of Adam Lambert and Chris Daughtry offering advice and sizing up the hopefuls, but I feel like that would make for really interesting television, showing us more of what happens behind the curtain.

Yeah, I liked the workshop too. It was a new thing. It gave the kids some preparation for what’s to come. Adam and Chris were super devoted – I’m very impressed with these guys. They showed up, they were there for two days — even though it was just a small segment that got shown — and they did a lot of things off camera that you never got to see.

TVLINE | Probably the biggest complaint I’ve seen from readers this year focuses on Randy Jackson and his role as mentor. We haven’t really seen any specific advice he’s given the contestants. Is that a fair criticism?

No. I mean Randy is our in-house mentor. He put together the workshop that you really liked, he brought in Adam and Chris. He’s been the mentor, and he’s actually working a lot — not only on camera, but off camera with the kids every week. And then he has brought in the other [guest] mentors. I think Randy’s doing a fantastic job.