Last night in Houston, Queen + Adam Lambert squeezed in another song to their 2+ hours set list!

They surprised the crowd with a jazzy version of Tie Your Mother Down during the encore, between We Will Rock You and We Are the Champions. QAL performed this song during the 2014 tour and various incarnations, but omitted it from the current News of the World tour set list. The following video has great sound but is shot from a distance. 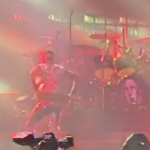 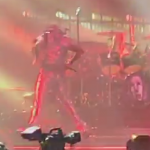 Click here to see the entire Houston concert on close-up video from @mardiblitz. Look for Tie Your Mother Down at 2:26:10. Halfway through the song at 2:28:54, it’s so cute when Adam jumps up twice to pull up his pants!

So now the North American tour is over. Next time on stage for this family won’t be until November when they begin the U.K. tour. Brian, Roger, Frank, the Queen entourage and Queen jet head back to England while Adam is flying home this very minute to West Hollywood via commercial airlines, where he will concentrate on finishing his next album. Yes, that’s my guess but don’t cha think it’s gotta be??!!

OMG! @adamlambert is on my @AmericanAir flight from IAH to LAX! @TMZ