Adam Lambert partnered with AT&T for the second year on the Live Proud movement and rewarded fans, this time on the east coast, for a seated acoustic performance. 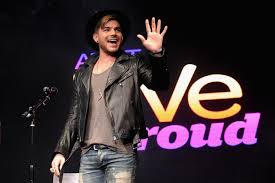 Not only was the musical presentation stripped down, but so was his appearance. Wearing only foundation, he topped himself with a dapper chapeau and black leather jacket. The boots were fabulous though and had a touch of glam. Adam genuinely enjoyed himself in front of this group, consisting of winners from the Live Proud meme contest and some Glamberts, who he immediately called out for their great style, saying “Glamberts love to accessorize!” 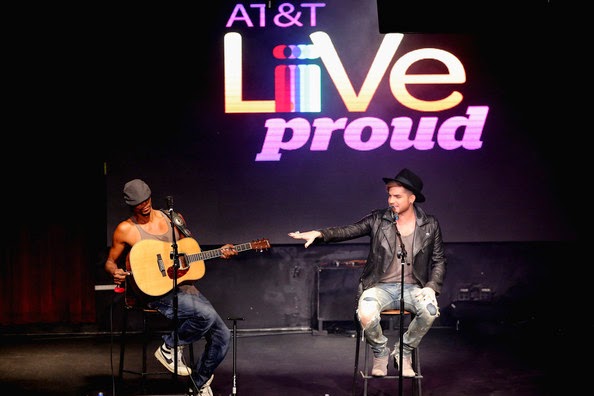 Adam speaks highly to his Glamberts ’cause they accessorize!

Adam performed four songs including two of his own, one from Queen, and a mashup from both him and Queen. Wouldn’t it be terrific if this mashup made it to January 2015’s UK/European tour? He sang Crazy Little Thing Called Love, Outlaws of Love, a mashup of Trespassing and Another One Bites the Dust and finished with Whataya Want From Me? The expression on his face during “thanks for loving me, ‘cause you’re doing it perfectly” (at 14:40) conveyed his appreciation for the crowd. Adam thanked the crowd, blew the audience a kiss, thanked his guitarist, stood up and left the stage. Unseen on this video, the audience immediately began chanting “Adam, Adam” to no avail. Host George Kotsiopoulos had some truly uncomfortable moments trying to deal with this. You may be able to catch it on this live stream:

Thank you to TALC for the following full-length performance video.