Adam Lambert was back from Florida and jumped onto a west coast stage, performing twice last night on The Late Late Show with James Corden. 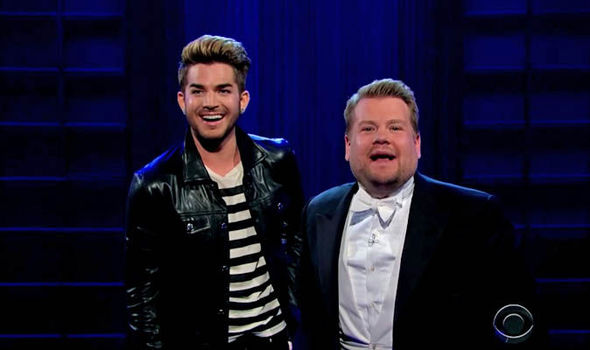 The show was pulling off its astounding(!) 50th episode, and the host was in full swing comedy mode for the event. Adam joined in the fun doing a parody salute to Corden using Queen’s We Are The Champions early in the episode.

Adam returned later to sing Ghost Town. He was in magnificent form and gave a stylized delivery full of nuances, proving why the industry has so much respect and admiration for him.

Also on the show were James Wolk from Zoo and Sir Ian McKellen, who seems to have a crush on Adam! Catch the remark at the end of this segment.

Ian kept mentioning Adam, raving about his hair later in the hour.

All of this is in good fun, as we get ready for Adam’s highly sought-after concert Saturday night at Morongo Casino. Fans have reported only 100 tickets were released for pre- and regular sales, with the rest being held for radio contest winners. Lord knows my good girlfriend Glenda & I tried at every opportunity from Los Angeles’ MyFM 104.3’s week-long contest. Almost every time we were 1 of the 20, but never #20 – the magic winning caller number. What this means is the small venue will be filled potentially with radio-contest fans, not necessarily Adam’s fans. But he can turn them into fans, right? All the better for Adam’s rising career.

I’ll have a story posted following the concert.